I am still going to a contact lens specialist in New York. When I moved to Pittsburgh I tried to replace all of my medical contacts, but the contact lens person in Pittsburgh wanted to fit me with very expensive, less comfortable, no improvement in vision lenses, so it was a good excuse to insure a yearly visit to New York. Not that I need much excuse.

For reasons I no longer remember I decided to fly this time, costing me easily three times as much as Megabus. I carefully prepared for the security inspection. To my great joy there were signs announcing that if you were born before 1937, you would not have to remove your shoes or light jacket. Joy did not last. They made me go back and remove my shoes and very small silver earrings. Going back I’ll try removing the earrings and the hearing aids and see if the shoes set it off. What a pain.

I’ll be here almost two weeks. I have two appointments with my doctor, one date with a friend, at least three more dates to be arranged and five museums and the Center for Book Arts. Should be a good time.

I will return to Pittsburgh for one week then off to Chicago and Door County. A great month.

I’ve taken time out for classes and yesterday went to the Three Rivers Art Festival and to a film about Chihuly. The rest of the time I’ve been slogging away at the boxes. I think I’m down to about ten boxes, some of which will remain unpacked, but it’s all still very messy and I’m in the catch-22 stage. Remember, before I moved in I brought lots of things from the other apartment, mostly pictures. I put them in closets so they wouldn’t get in the way of the movers. Now I have to put things in the closets but I can’t do that until I remove the pictures; I can’t do that until I can hang them, and I can’t hang them until I can get some of the furniture repositioned. With all of my planning, I didn’t get it right. Now I need two strong me to come and help. Also, I don’t know how difficult all the picture hanging will be because of the concrete walls.

I’ve decided to get rid of my chaise. I’ve been trying to sell it on Craigs list for months, with no results. I now have the Salvation Army coming on June 14. I’ve heard they’re very picky about what they take. I hope this will make the grade. Too bad I moved it. It’s too big for the room.

Perry is supposed to return tomorrow to paint the kitchen. I was originally thinking about a dark orangey-brown, but now I’m thinking about a kind of grayed-blue. I think I’ve made too many decisions; I can’t make up my mind.

Yesterday may have been Robin’s last day in the hospital. She was supposed to be up and walking Friday, the day after surgery. They sat her up in the chair and she passed out, leaving her worried all day she wouldn’t recover as quickly as she had hoped. She was walking when I arrived and continued walking or sitting in the chair all day. We are hoping today will be even better and we can take her to Renee’s apartment where she will recuperate for the next two weeks.

I’m writing this in bed in my friend’s apartment and I’m not online. She has a computer but doesn’t know much about it. I can only get online by taking the USB cord from her machine and plugging it into mine. I’ll do it later. Last evening we went to a concert at the Metropolitan Museum—the Pacifica Quartet, two violins, one viola, one cello. It was lovely, but my tinnitus gets stimulated by the violins and it makes me unhappy. These days I prefer piano music. It doesn’t seem to have the same effect.

The hospital has been very good. Robin and Steve both feel she is getting excellent care. She was in a four bed intensive care unit with constant nursing surveillance until afternoon when they moved her to a regular double room across from the nursing station.

On the day of the surgery, and for many days before, I felt like I had a lump in my chest. As the surgery progressed and we received reports from the operating room, the lump began to lessen. When I saw her again that evening most of it went away. Today I am completely relieved. I know there is much hard work ahead of us, but it’s all doable. Knowing Robin I’m sure she will recover quickly. Unlike her mother she loves exercise and can’t wait to start running again.

You can tell I am relieved by this next story about one of my pet peeves. Going to the hospital I take the subway then transfer to a bus. There is a new bus option: select buses, supposedly faster because of a dedicated bus only lane and they don’t make every stop. Also, you pay before boarding and don’t even show the receipt unless you are asked to do so by an inspector. The fine for noncompliance is $150. At each bus stop there are two machines for use with a transit card and one for cash. The express buses are not new. The city always had a system of limited and local buses. They seem to have extended it to more routes, but only the fare purchase system is new. As usual, I am the skeptic. At least on 34th st. I certainly don’t see the efficacy. The bus only lane is at the curb and there is always a parked truck or taxi blocking the bus. When people get on and try to pay they are directed off the bus and told to use the machines. Mostly they will have to wait for the next bus. I haven’t encountered any inspectors and I have no idea how much money the city is losing. But the thing that gets me most is that you must still carry lots of quarters if you don’t have a transit card: neither these fare boxes nor the ones on the regular buses will accept dollar bills for a fare now at $2.25. I’ve never understood this dedication to quarters, nine of them now.

Unfortunately not my apartment–I'm still looking–but this blog. This is my last post on Typepad. The blog will remain here until some time next year, but I am moving to a new studio on WordPress: https://ruthekarlin.wordpress.com/

Go there now to see the pictures I promised of my recent book creation. Change my bookmark, or subscribe, to keep reading my posts.

Fat-old-artist, who started this blog, will be no more. I thought I was being funny when I created the name. And it was a unique identifier. I had no idea it had p o r n o graphic implications. My friends yelled at me: I wasn't fat (I was), I wasn't old (ha!). No one questioned my being an artist, but that's where I wasn't so certain. Today, after years of recovery from owning a printing shop and then teaching computer graphics programs, I feel more certain of being an artist. I'm 25 pounds thinner than when the blog began, but now I'm absolutely ancient. So I guess I should be "not-so-fat-ancient-artist." It doesn't have the same ring.

I'll look for you in my new home. Come and visit. https://ruthekarlin.wordpress.com/

Obviously, I can't blog every day. It doesn't work for me. This time I have an excuse: I began to really feel the effects of that fall (or possibly something else is wrong) when I wrote the last post. You know I would never wear that purple outfit, not even to bed. Finally, yesterday, I went to the doctor nurse practitioner, who ordered several blood tests and a CT scan of my head. They post results online, and I read them, but maybe I missed something. Nothing seems to show a reason for my headache and sleepiness. I'm waiting for her to call me. Maybe I missed something. She had already assured me there was nothing to be done, except what I've been doing, if it was a concussion. Why do I hesitate about going to doctors? Most of the time they don't have answers, anyway.

Here's a picture of my backyard today. It's a dismal day, but those yellow and red leaves are really cheery.

I need that purple outfit and someone to hug me.

It was a newspaper box, vandalized and burned. I want to use it for my next book. Do you think it's less recognizable now?

I sat in front of the computer at least three times and couldn't think of anything to write. I'm still not doing very well. I went to a jazz concert on Saturday night, but I have nothing to report about it. Today was the fourth Osher history class about Washington, Adams, Jefferson. Today was Jefferson; lots of things I never knew.

My black eye is almost normal looking, but part of my face is still numb. Very annoying but it seems to be getting better. Maybe tomorrow I'll have something more interesting.

What do you think of this picture? 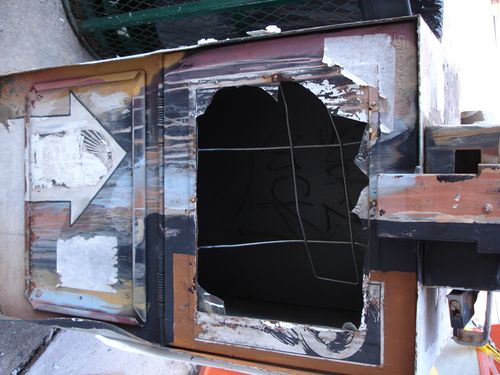 Here it is only November 4 and I almost forgot to post. It's 11pm and I just got back from a lovely Shabat dinner. It's been a difficult day, the result of a night of not sleeping. Thursday evening I tutor two ESL students. We meet at a Panera where I usually buy a decaf to justify my use of a table. I didn't want coffee last night so I ordered tea and chose something I thought was herbal. I can't drink real tea at 8pm and expect to sleep. I read, I played solitaire on the netbook, I answered emails. I think I finally fell asleep about 5 and slept to 9:30. It wasn't enough. With my eyes only partially open I went to look at an apartment at noon, came back and took a nap, did a little work on my latest book, finally went out to dinner. Now I'm going to sleep. Good night!

Monday night, after I got in bed but before I turned out the light, I got a text message offering me a free iPad3 for testing. Just call or go to a certain website. I turned off the phone. In the morning I Googled iPad3 and found a lot of sad people who bit on the offer, their contact lists co-opted to send out more spam or worse. There's a scammer born every minute. I just figure if it's too good to be true, it isn't.

This is how much snow we had last weekend.

All work on this site, not credited to someone else is copyright 2017, Ruthe Karlin. All rights reserved.