The weather forecast for April 1 and 2 showed first a beautiful day and the second as rainy. With this in mind I put my bag in a locker at the Okayama station and got on the train to visit Ritsurin Park. This is another re-visit. Ritsurin is known as one of the largest and most beautiful parks in Japan, but that wasn’t my impression on my first visit, on December 2, 2008. In fact, this was probably the day I decided to change my return flight and leave early. There didn’t seem to be any reason to stay and look at winter-dreary gardens. Four years and four months later I found the garden beautiful and spent hours walking around. I entered near a field of blossoming cherry trees and families picnicking on the lawn, one of several such celebrations of spring.

According to the brochure the park dates back to the early 16th C. when the lord of Sanuki, Ikoma Takatoshi, commissioned the construction of a garden around South Pond with Mt. Shiun as a backdrop. Successive lords made extensions and improvements until the park was completed in 1745, during the reign of the fifth lord, Yoritaka. In 2003, the park was designated a special beauty spot. One place, called the Shofuda, differs from other rock arrangements and is thought to be one used around the year 1400, probably indicating the place where the present park originated.

Another one of those trees that get me 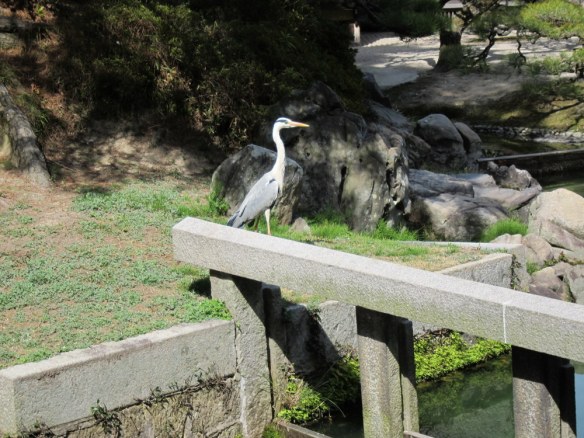 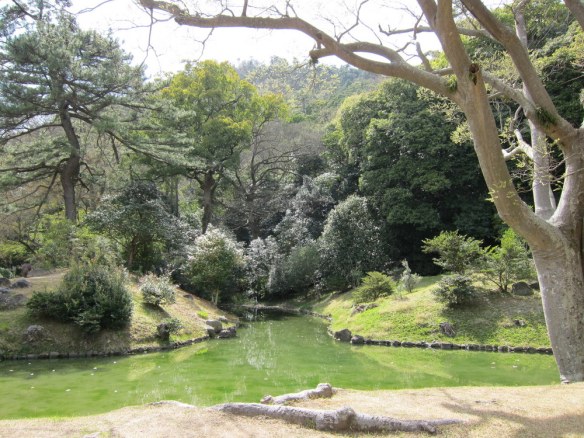 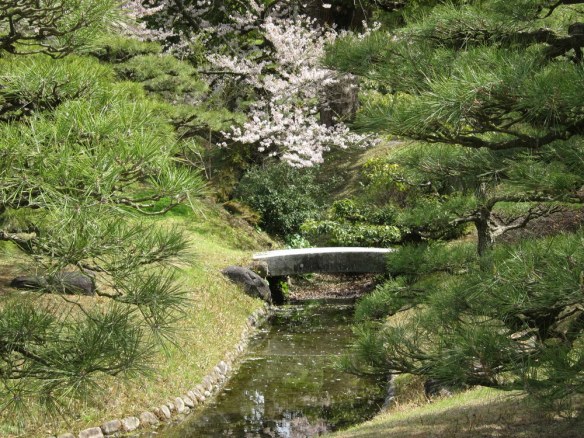 April 2 rained, as forecast. I remained in the hotel until about 10 am with no pressing need to go anywhere and tired after nine hours of sleep. Outside, I found the rain warm and gentle with no wind. It was not unpleasant. First thing, I went shopping. My camera seems to be draining batteries at an unprecedented rate, possibly because I am taking so many pictures, or possibly because the batteries are getting old. I decided another battery might be a good thing. I went to Bic Camera, a combination of camera, computer and large appliance store with a bit of Costco thrown in. Getting another battery was easy; I just showed them what I had, even managing to get the cheaper knock-off, not the genuine Canon brand.

I decided a museum was the best place on a rainy day and started walking. Not too far along I stopped at Mr. Donut for a surprisingly good cup of coffee and a totally forgettable donut. Fortified, map in hand, I started walking in earnest. Maps are only partially helpful since often there are no street names on the street, or on the map, or the names are not the same. Also, having had previous experience with Japanese maps I am never confident about which way is north, not that I necessarily know which way is north anyhow. So, of course, I turned down the wrong street and walked a considerable distance before stopping and getting directions. Retracing my steps, then going further down another street I came to the Okayama Orient Museum; orient, in this case meaning middle east. They had some lovely stuff, but more important, they were wonderful to me, even taking my wet jacket and hanging it up.

They gave me an Android tablet with info about some of the exhibits. As is so often the case it never told me what I wanted to know. There was an exhibit of beautiful mosaics, similar to things I had seen in Israel, but no information except a map indicating it had come from somewhere around there. I found someone who could read the Japanese and she said they came from Syria. More than that, I never found out.

Nearby, the Prefectural Art Museum had some moderately interesting Japanese art, from the collection of a patron. As with many American museums there was a strong focus on the collector and I found out more about him than I did about the individual work.

The rain had moderated to a light drizzle when I left the museum so I boarded a tram and went to another garden, Tokoen. I knew nothing about it when I entered and no one was there; I just happened to find it on the map. It’s a lovely, small garden built around a pond. I enjoyed the peace and quiet of it in spite of the rain.

Later, I found on the internet, it had been built earlier than Korokuen, the large Okayama garden, as a private villa for relaxation by Tadakatsu Ikeda, head of the Ikeda clan that once ruled over southern portion of Okayama Prefecture. It is now privately owned and costs 400 yen to enter. Because of the rain no one was there to collect. I did feel like I was sneaking in, the way I felt at Yusentei. This is a picture of the sign. If anyone can translate for me, I would appreciate it. 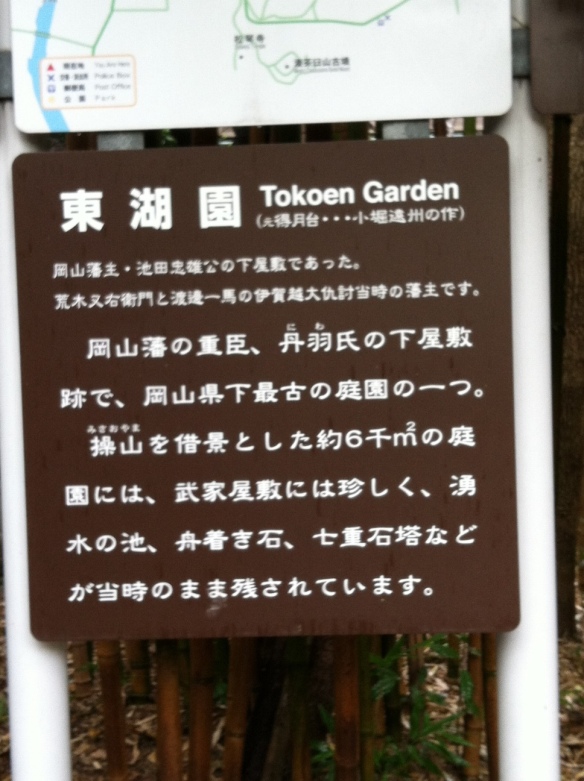 I took the tram back to the train station (my hotel was nearby) and went looking for green stuff to eat. Finally found something I hope was spinach and another tiny salad with lettuce, avocado, a tiny bit of tomato and silken tofu. It came with a tiny bottle of salad dressing. Each of these salads weighed about 100 grams, about three and a half ounces, and cost about $4 each. Green stuff is hard to come by. Earlier, for lunch, I had a nice size bowl of rice flavored with thinly sliced beef (I’ve given up vegetarianism while I’m here), for the same amount of money as one of the salads..