I walked around for half an hour before I finally took this picture. Have to go back.

A beautiful day, sunshine, blue sky, cool, just the way I like it. I felt great; no pain anywhere; could have been 60 again. I walked over to the bus center where I was told I would find a bus for Yusentei, the most beautiful garden in Fukuoka. Had an hour’s worth of trouble finding the bus, but finally got there with the help of the driver. I wasn’t sure if I was in the right place, but then I seldom am sure of anything here. I saw an open doorway in a garden wall and went in–no signs, no one to collect my 280 yen. A woman was sweeping leaves into huge black garbage bags. She never looked up and I walked right past. I still wasn’t sure I was in the right place, but it was one of the most beautiful gardens I have seen. I walked some distance without taking any pictures; just enjoying, figuring I’d make a second round for photos. 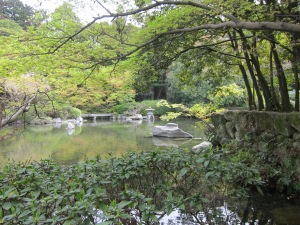 Finally, stunned by one of the scenes I took out the camera. I spent a lot of time walking around and photographing, never seeing another person. I knew I had come in the wrong entrance and figured I would go to the front and pay, when I was stopped. We had no common language so I wasn’t sure if she was annoyed because I hadn’t paid, or what. Finally she made it clear I would have to leave. Terrible disappointment. Like finding the pot of gold at the end of the rainbow and being told I can’t have it. She and the other woman showed me out the same way I came in and then closed the door. I walked around to the front entrance and found everything locked up.

One more shot before I let her throw me out.

I didn’t screw up this time. The web page said they were closed Mondays. This was Tuesday. In fact, another garden here  purported to be closed on Tuesday, so I was disappointed but didn’t bother going there. 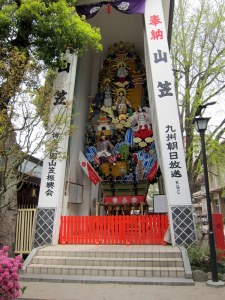 Kushida Shrine: next stop after my bit of shopping. 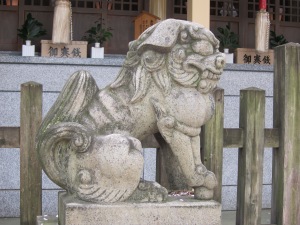 Although I hadn’t planned to stop I will be coming back through Fukuoka on Saturday. Maybe I can get to both of them. Took the bus back to town and walked through a shopping arcade that had two fabric shops and a paper store. You were right Mage, some interesting fabrics. I just bought a little for making book covers. Visited two shrines one much more interesting than the other, and went to the Fukuoka Asian Art Museum, which collects and exhibits contemporary Asian art. By the time I started back to the hotel the sky was getting dark and I felt like I was 85. It was worth it.

Canal City: a huge shopping center with all kinds of entertainment.