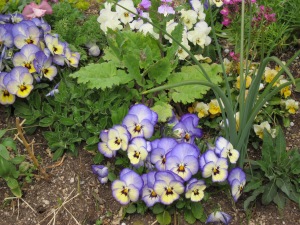 This is not going to be a nice review. For a much more positive portrait of this place, go here.

I never wrote up yesterday so I’ll save it for tomorrow’s train ride and deal with today while it’s still fresh in my mind. Yesterday was two good gardens will be mostly pictures.

Today I took a trip to Naoshima a nearby island, requiring two short train trips and a ferry. Read about the town and some of its industry here. The town bus, costing 100 Yen, met the ferry and took us to the ticket center and waiting area for Chichu museum where a long line was waiting. Before I go on, I have to say I hate waiting in line. Standing is not good for my legs or my soul and I work to avoid it; meaning I don’t often stand in any lines. But I got in this one and listened uncomprehending to a young man giving a long speech in Japanese. When the line moved and I finally got to him his nametag said bilingual guide and he told me, in English, he was giving me a slip of paper with a time on it, 45 minutes ahead, and at that time, and for the following 30 minutes, I would be allowed to buy a ticket to enter the museum.

Some of you who read my blog also read Ronni Bennett’s wonderful blog where she invokes crabby old lady. I am not so polite: today I was bitchy old lady. And that was only the beginning.

I waited the 45 minutes, grumbling under my breath, and finally paid my 2000 Yen (about $22) and walked over to the museum, where after climbing a steep incline and then taking an elevator, I was informed I would have to wait again to get into the Monet room. The museum, designed by Tadeo Ando, is large with lots of empty reinforced concrete corridors and entirely underground but all the work is illuminated with natural light, allowing you to see it under different lighting, according to the brochure. Maybe when the clouds move fast, but I can’t imagine standing around waiting, no seats, and all those people in line behind you. This museum has work by only three artists: James Turrell, Walter de Maria and Monet. So I stand in line, take my shoes off and put on slippers then finally get in to see the five Monet water lilies. How many water lilies did he paint? I’ve seen them in Paris, Chicago, New York and even Pittsburgh has one. These were not the best water lilies I ever saw, but they were certainly the most carefully displayed.

So, what next? I could go and stand in line to see the Turrell. I don’t know anything about his work, but the thought of one more line did me in. I went to the de Maria where there was no line and then, carefully filling in their satisfaction survey, I left. The best part of the museum, for me, was a kind of Monet garden along the path leading to the museum. These pictures are from the garden.
There are two more museums at only 1000 Yen each, but I skipped them and walked around outdoor sculpture by Nikki Saint Phalle along the beach. No waiting.

I got back on the bus, which was waiting for me for a change, and went to the art houses. This is a group of widely spaced houses that had been abandoned or falling down and were renovated (?) and made into works of art. After paying another 1000 Yen I was told I would have to get a ticket and then there would be an hour and a half wait to see another Ando/Turrell creation. And I had to walk to said creation in order to get the ticket. Can you see the steam coming off the top of my head?
I got the ticket which was actually for 3 o’clock, two hours later, then walked around to see the other houses.

The idea is fascinating, in principle. One of the museums in Pittsburgh does something similar and I think more interesting. This house, which had been a dental clinic, was given an intriguing floor and housed this funky almost Statue of Liberty I wasn’t supposed to photograph. Couldn’t resist.

I never saw the Ando/Turrell masterpiece. About 2 pm, having walked or stood from about 9:30, I got on the bus, went back to the port and made the ferry/train trip. Now I’m doing laundry. The moment of truth, or dirt, had come.

Me, in one of the pieces on the beach