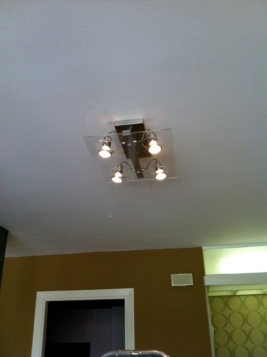 Remember that awful chandelier? It was the first thing we replaced. I’m so pleased with the result. Ed arrived on schedule at 9am. First he removed the sconces only to find wallpaper with green leaves underneath. We decided to wait until the wall was painted before we installed the new fixtures. But, then he made me really happy with the chandelier replacement.

I never took a good before-picture of the bathroom, but we replaced an awful light fixture in there also. We still have to remove wallpaper and paint in there. There is gray ceramic tile on the walls and beige fixtures. One wall and ceiling have wallpaper with a gray and beige pattern on white, along with lots of silver. I’m going for white wall and ceiling.

The toilet and basin are relatively new. The tub was blue originally; probably all the fixtures were blue. The tub was refinished and some of the paint is coming off. I’d love to remove it and put in a walk-in shower, but it’s not going to happen.

Ed finished the workday by removing the trellis. I’m not sure what we’ll do there. Maybe another dropped ceiling (without a trellis) is necessary. I’ll put in track lighting, but that trellis covered a multitude of sins that will have to be fixed. Haven’t heard from the cabinet painter or the floor guy. I can’t believe it takes days to figure an estimate. Do you think they don’t need the business?