If you think it's the greatest bit of prose ever written, get rid of it. That's common advice to writers and probably should be given to artists also. I fell in love with the idea of embroidering this tree on a piece of obi silk, and using it as a book cover. I spent all summer working on it. I should have just tacked it on the wall; the book would be better bound with something else.

So I'm not happy. Actually, I'm never happy with my finished work. Sometimes after it sits for months or years I like it better. We'll see about this one.

So that I remember, and you learn, I'll tell you what's in my head. First, putting a photo transfer on silk is not a great idea. I said that before, but now I have another reason: making it into book cloth didn't work. The fusible interfacing never fused properly. I had lots of trouble with glue coming through and you can see the lumps and bumps because of the lack of proper fusing.

Second the silk cloth is really too
thick, even though the glue came right through it. Folding it under to
make sure it didn't ravel made it too thick. I probably should have
just cut it and used some kind of fabric stablizer. This fabric was machine
embroidered on what would have been the right side of the obi and the
threads are carried loosely along the back as the color and pattern
changes. 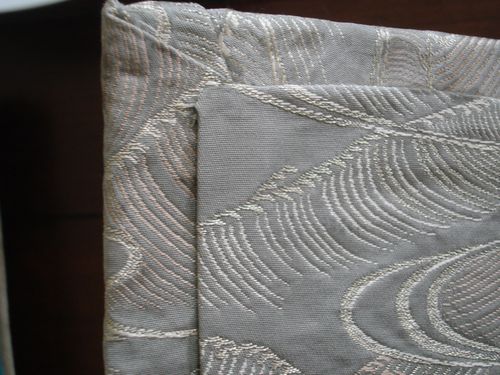 I used archival foam board instead of the more commonly used davey board. It's much easier to cut. I made a mistake there also. Instead of cutting that 1/4" piece for the binding edge, and moving it 1/4" away from the large piece, I left it attached on one side just cutting away the inside foam and the other side. After I finished the binding it was still too stiff. It doesn't open as nicely as my earlier books.

I had trouble finding a good, heavy binding cord. My preferred cord is waxed, linen carpet thread; not beautiful enough for all that embroidered silk. I tried several other kinds of cords, none of which worked. In desperation I went to Michael's (not a lot of choice here in Pittsburgh) and got this silvery stuff. It pulled tight and did the job, but I don't like it. Finally, I had trouble drilling the holes and the back holes don't line up properly. The whole thing was too thick, but probably would have been better if I had used that 1/4" space technique.