Something I saw on Facebook this morning made me start thinking about fat children; my fat childhood came with me on today's walk. My brother  and I were both fat children and both of us hated being fat. It left us with scars that affected our entire adult lives, in fact, probably killing my brother three years ago.

Here is my kindergarten picture. I wanted to be one of the skinny girls on the right, not one of the fat ones on the left. Obviously, life in the fat lane began before I entered school and continued until I was sixteen when I took control of my life and finally managed to get to a "normal" size (14). I hate to blame my mother for this, but who controls the eating habits of a three, four or five year old, or even a 10 year old. My mother expressed love with food and most of her communication with us involved food. She controlled how much went on our plates and always urged us to clean those plates. "Think of the starving children in Europe." 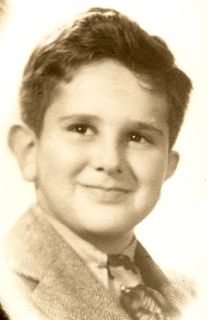 If I wanted to eat a packaged cookie, which was in the house, she yelled at me. But she was an excellent baker; most of the time there were home-baked cookies or cakes, which she urged us to eat. Looking at the photos, and there aren't many, brings back lots of memories: the dresses I couldn't buy because there was nothing to fit me. Sometimes I was frantic about it. Chubbie sizes were introduced at some point when I was a child, but there never seemed to be anything for me.

This is a picture of Arvin, about ten years old. He was beautiful, but all he saw of himself was his fat, well disguised in the photo. He was four years younger than me.

I wasn't allowed to buy milk in school. They used to give us half pint bottles before recess for a milk break. They cost a penny or two. It wasn't the pennies: it was my mother's effort to keep me from getting fatter. It made me always the outsider.

Nice girls didn't exercise. Jewish girls were nice. Therefore, Jewish girls shouldn't exercise. How's that for a syllogism. My mother's idea of a perfect girl child was someone who sat at home and read. If no new books were available, the perfect child would sit and twiddle her thumbs. I don't remember when I began my rebellion; probably with the thumb twiddling and continued through most of my mother's life. As I got older there were several times when she would get really angry at me if I lost weight. I guess I was insulting her.

My exercise now is like a moral imperative. I can't say I love it; I think it's very important and helps keep me moving.

7 thoughts on “Walking with my “fat child””