I did it yesterday morning. In fact, I did my leg exercises, walked my three miles, then went to a museum in the afternoon. Of course, I was wiped out by dinnertime. Oh well.

As Phyllis and I started to walk in Frick Park we were assailed by tiny flying things, maybe mosquitoes. I’m usually a mosquito magnet so I wasn’t happy. We’ve had a lot of rain here. Although the path wasn’t wet we decided to leave and went over to Homewood Cemetery, next to the park. Where the park is wild and only the paths are cleared, the cemetery has broad roadways and the lawns are beautifully manicured. I don’t like it as well because it’s usually sunny–not so many trees, but it was cloudy for most of our walk. Most of the cemetery is wonderfully well kept. After all, it’s the finally resting place of some of Pittsburgh’s most prominent citizens, like Henry Clay Frick.

We talked about the Carnegie International, which Phyllis had seen the
day before, and I was anticipating seeing in the afternoon. (I’ll write
about it next week.) About two-thirds of the way through the walk we came to a place that could provide material for artist installations. An old, deteriorated building had been destroyed. There were some old monuments, bricks and other building materials in a pit where the house had stood. I’m surprised they haven’t cleaned it up; it’s been like that for awhile. Here are a couple of pictures looking into the pit. 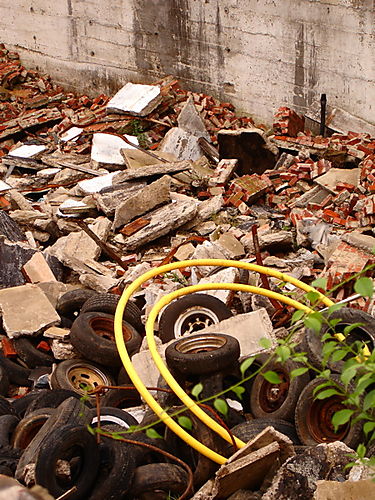 This strange thing was on the edge of the pit. I don’t have a clue about what it is. Kind of makes me think of an elephant.